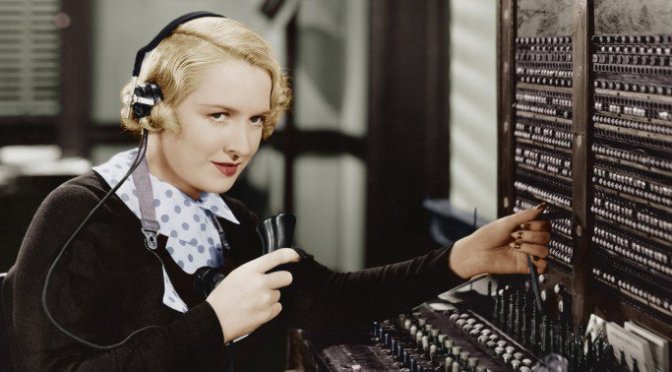 Do you remember phone operators?  I mean the kind who answered switchboards and connected calls?  Of course you don’t and neither do I, however, today we are celebrating the very first female Phone Operator.  It’s Emma M. Nutt Day!  Emma, who was very glad her name wasn’t Imma, was the first female phone operator.  Hired by Alexander Graham Bell to work at the Boston Telephone Dispatch on September 1, 1878, she replaced the rude teenage boys who were originally the go to source of labor for this position.

Can you imagine having to deal with an adolescent boy, who’s uncomfortable, tired and rude?  She was more than a stone’s throw nicer and polite. Next hired was her sister and then almost all the women in the area.  Regardless of the invasive interview process which included, height, weight, and arm length requirements, women saturated the industry. Now, here’s where things get interesting.  Soon there were so many women working as switchboard operators they formed a union and asked for job growth opportunities.  They wanted to be considered for the higher paying blue collar jobs traditionally given to men. They got what they asked for and the EEOC persuaded the American Telephone and Telegraph Company (AT&T – never knew what that stood for) to sign an agreement opening every job in the company to men and women.  The kicker is, more men were willing to work for less pay as switchboards operators, because it was less strenuous than being an installer or lineman and for the same reasons, not as many women went after those higher paying jobs. In the end more men than women ended up as switchboard operators than women.  Talk about a switcheroo.

Celebrate today by examining the end game of your wants and needs.  Think, think, think, and…